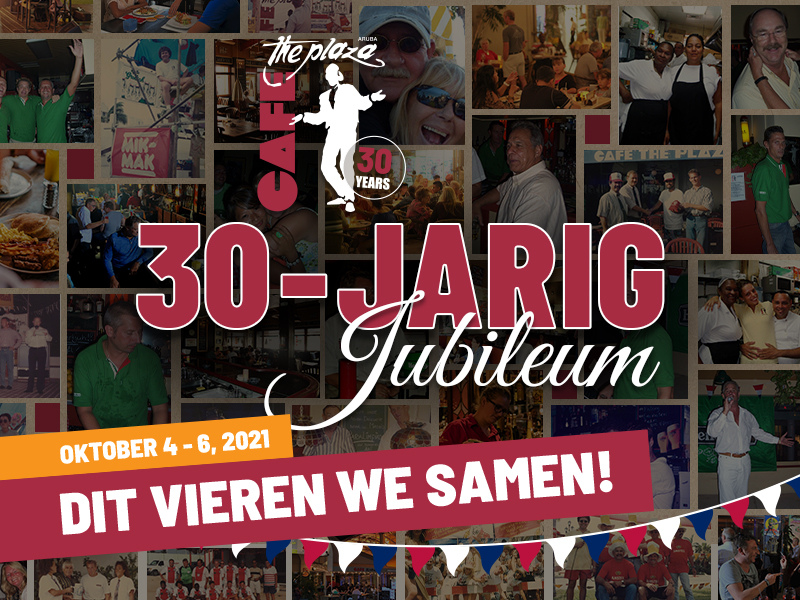 In the year 1991, when the first GSM cell phone was made in Finland, Bryan Adams was prominent in the hit parades with ‘Everything I do’ and Aruba was becoming an increasingly popular vacation destination, Café the Plaza in Renaissance Marketplace was founded by two Dutch adventurers: Harry Koeman and the late Hans Nooter (2012). Their concept of a Dutch café was an instant hit and the many events at Café the Plaza have become famous over the years: ‘paalzitten’. Euro and World Cups football, ‘haringhappen’ and many more. Now, from October 4th till 6th, Café the Plaza will celebrate its 30th anniversary with amazing deals!

On Monday, October 4th, you may enjoy a Surinam Night with an authentic Surinam Buffet (Surinaamse rijsttafel) and on Tuesday, October 5th, many delicious Dutch specials will be featured during the Dutch Night. On Wednesday, October 6th, the big day itself, every guest will receive a special treat and the entire day they will offer a 30% discount on all food and beverages. That’s value!

So, book your table in advance at Cafetheplaza.com and celebrate with the dedicated team of Café the Plaza this impressive anniversary. Congratulations to all guests, staff and fans of this amazing Dutch Café-Restaurant!

A new edition of the search for Aruba Top Chef is coming up!

Next post
A new edition of the search for Aruba Top Chef is coming up!

The Best Loyalty Program in Aruba!

In the first week...

Earlier this week a...